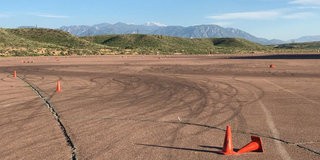 The largest class in Colorado was D Street with 15 drivers.  Jaik Ortiz set the pace on day one, followed closely by Chris Dorsey and Ian Farrell.  Dorsey, driving Joe Lavelle’s Subaru WRX, found time on his second run while Ortiz and Farrell found cones.  On his third run, Dorsey logged one of only two DS times in the 51s, with a 51.030.  Ortiz and Farrell both failed to improve on their first runs and both moved down the standings as Brian Killourhy, Steven Clark and Saraj Pradhan found time.

On Sunday, Andrew McGibbon set the pace after Dorsey and Pradhan coned away quick first runs.  However, McGibbon couldn’t improve much from his first run and left the door open for Dorsey and Farrell, who joined McGibbon in the 53s.   Several other drivers found their way into the 53s on their third runs, but nobody could catch Dorsey with his 53.061.  Dorsey ended up taking the D Street win by nearly two seconds.  Ortiz, Killourhy, Farrell and Shea Seefeldt rounded out the remainder of the D Street trophy spots.

Street Touring Ultra was an exciting battle between different makes of cars and tires.  For many, Dave Ogburn III and Lane Borg were favored to take the win in Colorado.  However, Chris Gladu in the WRX STI and Mark Melchior in the BMW M3, both on Nexen tires, were counting on the home field advantage.  Along the way, Ogburn and Borg had to overcome a trailer tire blowout and a stolen set of wheels and tires just to get to Pikes Peak International Raceway.  While all that was happening, Gladu was spending the entire night building and installing a transmission for the event.

Ogburn had the early lead followed closely by Gladu, and nearly one second clear of Borg.  All four drivers found time on their second runs, with Gladu in the lead with a 49.0.  Ogburn and Borg were both “dirty” on their third runs leaving it to the hometown duo to fight for the top spot on day one.  Gladu crossed the line with a 48.9, with Melchior quickly topping that with a 48.5.  After several minutes passed, a cone call on Melchior was realized, giving Gladu the lead going into day two.

Sunday saw the standing change as Gladu did not finish (DNF) his first run and Melchior found two cones along the way.  Ogburn and Borg ran nearly identical 51.7 second runs, with Ogburn slightly quicker.  Borg failed to improve after his first run, making it a three-driver battle.  Gladu and Ogburn stood on their second runs. Meanwhile, Melchior used his last run, and warm Nexen tires, to record the fastest STU time of day two and improved his best time by nearly a full second.  However, it wasn’t enough to catch Gladu after his day one lead.  Gladu and Melchior also finished third and fourth on PAX overall for the event, lending some credibility to the Nexen tires.

The closest battle to be found in Colorado was in B Street, where six drivers in four different makes competed for two trophy spots.  After first runs Saturday, Greg Paine was the clear leader in his 2017 Focus RS.  However, Paine was unable to improve on his first run and had to watch as Keith Papulski, in his Audi TTS, used all three runs to improve.  At the end of the day, Paine still had a slight advantage over Papulski going in to day two competition.  On Sunday, the two drivers reversed roles with Papulski leading the way early and sitting on his first run, while Paine used all three runs to get his best time.  When all was said and done, Paine scored the victory over Papulski by 0.101 seconds.

Words and Photo by Chris Dorsey